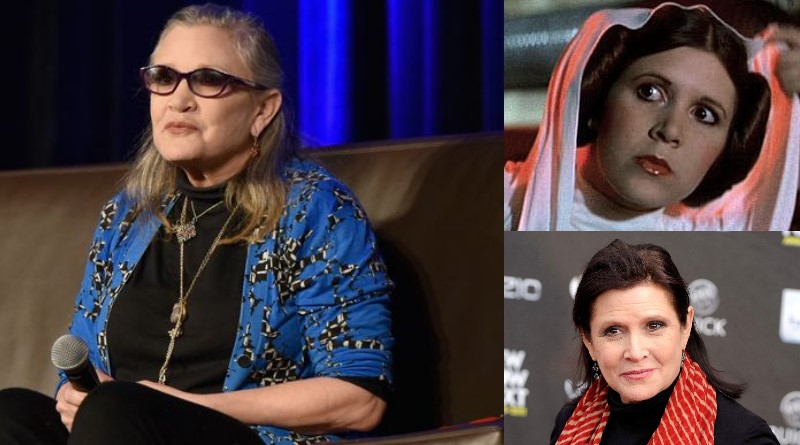 “Firefighter paramedics provide advanced life support and aggressively treated the patient, who was transported to a local hospital,” said Erik Scott, a spokesman for the LAFD. The patient’s name, age and gender was not released, nor was there information on whether the patient was breathing at the time of transfer. The name of the hospital the patient was taken to also was not released.

Fisher is survived by her mother, singer/dancer/actress Debbie Reynolds, 84; daughter, Billie Lourd, 24; her brother Todd Fisher; and two half-sisters. Her brief marriage to singer/songwriter Paul Simon ended in divorce in 1984.

The actress and author had been on tour to promote her latest memoir, The Princess Diarist, based on the diaries she kept as a 19-year-old shooting what is arguably the biggest movie of all time, 1977’s Star Wars, playing Rebel Alliance leader Princess Leia Organa, she of the famous double-bun hairstyle.

Her books, whether novels or memoirs, were funny, sharp and revealing. Among other things, her latest revealed her brief affair with co-star Harrison Ford, who was 14 years older and married with kids when they made Star Wars.

Carrie Fisher, photographed in December 2015, was being treated in an intensive care unit after a serious medical emergency on a flight, her brother Todd Fisher, told the Associated Press..  Robert Deutsch, USA TODAY

The actress was back onscreen playing Princess Leia in Star Wars: The Force Awakens in 2015 and Star Wars: Episode VIII, now in post-production. She, Ford and others in the original cast again found themselves walking red carpets, taking bows and taking Star Wars questions.

Fisher, as always, was accompanied by her little French bulldog Gary, the pooch who helped her cope with lifelong anxieties — later diagnosed as bipolar disorder — that helped lead to her problems with substance abuse.

Carrie Frances Fisher grew up marinated in Old Hollywood, loving and loathing it, embracing and rejecting it, always coming back to it as it evolved into New Hollywood. She was the daughter of crooner Eddie Fisher and Singin’ in the Rain star Debbie Reynolds, born in 1956 in Beverly Hills. Less than three years later, Eddie ran off to marry Elizabeth Taylor. It was a blow her mother eventually recovered from but Carrie not so much.

As a teen, she had a small role in Warren Beatty’s 1975 comedy Shampoo, but Star Wars changed everything for her, blasting her into a star galaxy far, far away from what even her parents had known. Fisher had a small but memorable gun-toting role in the 1980 comedy The Blues Brothers — Fisher was at one time engaged to star Dan Aykroyd — and also appeared in Hannah and Her Sisters (1986), When Harry Met Sally … (1989) and Austin Powers: International Man of Mystery (1997). Most recently, Fisher had a guest spot as an American mom on the British TV series Catastrophe, streaming on Amazon.

In 1987, she published her first novel, Postcards From the Edge, a semi-autobiographical satire of her real-life struggles with drug addiction in the late 1970s and her relationship with her mother. It was a best seller and later was made into a movie starring Meryl Streep and Shirley MacLaine.

Never shy about speaking her mind, she was open and often brutally honest in interviews and her books, discussing her love/hate dynamic with fans, her place as a geek goddess and that slave bikini she had to wear in 1983’s Return of the Jedi.

Throughout her up-and-down movie career, she remained a product of Hollywood who could step back and explain its history and rituals to the outsiders, always ready with a caustic comment or pointed joke. Hollywood could be exasperating and brutal, but it was still hers.

She felt somewhat the same about Leia. As she told USA TODAY last year, “I carry her around and I know her better than anybody else and we wear the same clothes a lot of times.