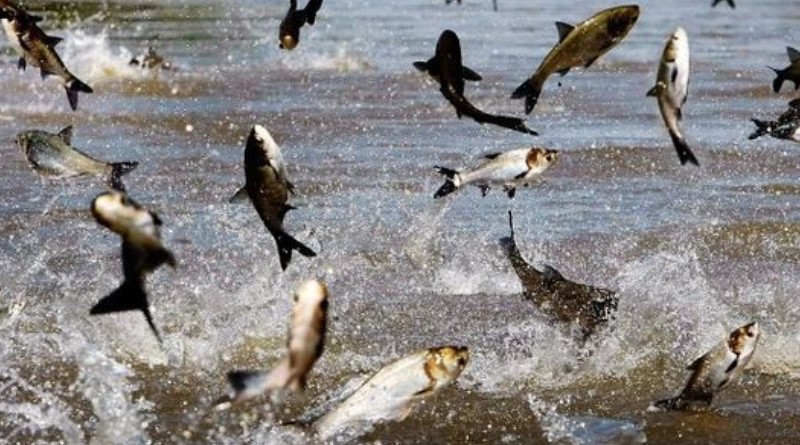 MEMPHIS — Leaping from rivers and lakes like aquatic projectiles and ravaging the food base of native fish, Asian carp are loathed by outdoors enthusiasts and state wildlife officials alike for being not just a nuisance, but a threat to boating and fishing industries worth $2.9 billion and $2.1 billion, respectively, in Tennessee.

Enter Joe Gillas. He sees the invasive fish as an opportunity.

Gillas’ company, Riverine Fisheries International, plans to moor a factory fishing vessel at the Port of Cates Landing, located on the Mississippi River near Tiptonville, Tenn., about 100 miles north of Memphis. The nearly 350-foot-long boat would process Asian carp caught in the Mississippi and other rivers and lakes into food products to be exported to some 20 countries, including China and Russia.

“I think there’s a good business model here,” said Gillas, 53, who was born and raised in Alaska and has fished all over the world. “I think we can do something good and make money at the same time.”

The Corps of Engineers early next year likely will approve the company’s application for a permit under the Rivers & Harbors Act authorizing the mooring of the vessel, said corps biologist and project manager Randy Clark.

Riverine Fisheries is an $18 million venture that includes “catcher” vessels that would help harvest the fish and a warehouse, logistics center and administrative headquarters in nearby Hickman, Ky. Gillas said the company could hire more than 100 people and begin harvesting and processing carp in February.

The firm is one of the more ambitious entrants into a business that targets the huge populations of Asian carp, including bighead, silver carp, black and grass carp, that have invaded the Mississippi’s watershed and other parts of the U.S. over the past 40 years. The fish, imported from Southeast Asia for the purpose of filtering pond water in Arkansas fish farms during the 1970s, escaped during floods and spread quickly in the wild, where they can eat 20% of their body weight in plankton each day.

Having out-competed native fish for food and habitat, the carp now are established in about two dozen states and make up an estimated 97% of the biomass of portions of the Mississippi and Illinois rivers, according to the National Wildlife Federation.

The carp represent the “Number One concern for fisheries in Tennessee,” said Bobby Wilson, assistant director of the Tennessee Wildlife Resources Agency. Because they tend to jump in large numbers when startled by motors, the fish also are a menace to water-skiers and boaters, he said.

“We definitely support an operation like this (Riverine Fisheries),” Wilson said.

Other operations that have sought to make money off the carp include Augusta Fisheries, located in Samburg, Tenn., which processes and freezes the fish for export.

Riverine Fisheries will harvest carp from within a 400-mile radius, focusing on areas where the invasive species have had the most impact. Advice from fish and wildlife officials from area states will help direct the operations.

“Wherever there’s a population of carp that makes sense to harvest, that’s where we’ll be,” Gillas said.

The fish, caught with the use of nets, will be delivered by truck to the vessel, which will serve as a “floating factory,” he said. That boat, the Riverine Enterprise, has a long history of working in the Bering Sea and off the East Coast. It has been converted to specifically handle Asian carp and will process them according to the needs of each buyer, with some minced, others gutted, some split.

There is a strong demand for the carp internationally, Gillas said.

“We have a lot of markets in 20 countries ….,” he said. “This hasn’t been done as much in the U.S. because it’s a relatively new species.”