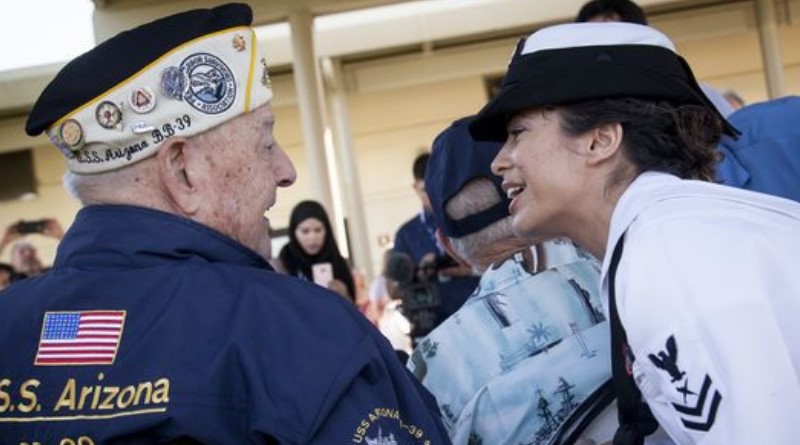 HONOLULU — Seventy-five years after Japanese forces struck the heart of the U.S. Navy’s Pacific Fleet in a fiery ambush at Pearl Harbor, thousands of veterans, military officials, dignitaries and a dwindling number of survivors will gather Wednesday to remember the loss of life and the start of a war that changed the world.

The Navy and the National Park Service will conduct a ceremony on the shores of Pearl Harbor, within view of the USS Arizona Memorial, where the remains of two sailors who survived the attack and the war will be interred later in the day.

A moment of silence will mark the time — 7:55 a.m. Dec. 7, 1941 — when the first Japanese planes filled the skies over the harbor where most of the Navy’s Pacific battleships were moored. The guided missile destroyer USS Halsey will pass by the Arizona in remembrance, followed by a missing man flyover.

Leaders from Hawaii and other states, including Gov. Doug Ducey of the state that gave the USS Arizona its name, will lay wreaths to honor the fallen.

A small boat rescues a USS West Virginia crew members from the water after the Japanese bombing of Pearl Harbor. Two men can be seen on the superstructure, upper center. The mast of the USS Tennessee is beyond the burning West Virginia.  AP

A milestone year for anniversary

This Pearl Harbor Day holds greater significance, for its milestone year — the 75th anniversary — and because it may be the last time many survivors return for such an observance. Most veterans of the attack are in their mid-90s and fewer attend memorial services as each year passes.

President Obama will not attend the ceremonies Wednesday, but will return to Hawaii after Christmas and meet with Japanese Prime Minister Shinzo Abe for another historic moment. No sitting Japanese leader has visited Pearl Harbor in the 75 years since the attack.

Park Service officials are expecting overflow crowds for the ceremonies Wednesday, owing to a strong interest among veterans and families of survivors and the men and women who died that day. The sky on Oahu was dark with clouds Tuesday afternoon, and rain was in the forecast for Wednesday.

The early-morning attack killed 2,403 Americans. Nearly half the casualties occurred on the USS Arizona, where 1,177 of the 2,512-man crew perished. Eighteen ships were sunk or run aground, 188 American aircraft were destroyed and nearly as many were damaged.

The Japanese launched the attack from six aircraft carriers, dispatching fighters and bombers in two waves. The Americans were caught unprepared to fight back in force. The Arizona sank 14 minutes after the attack began and many U.S. aircraft never took off from the bases.

The day after the attack, President Franklin Roosevelt delivered a speech on the defining moment, when he described the attack as “a date which will live in infamy,” propelled a nation into war.

The Arizona, which had never fired its big guns at an enemy in battle, emerged as a potent symbol for a wartime America.

Many of the survivors did not return to Pearl Harbor for years after the attack, but annual observances have drawn some of them back year after year in recent decades.

Remains of crewmen to be interred

Some of Wednesday’s events will be private, including one of the most poignant. At 4 p.m., the remains of two Arizona crewmen who survived the attack will be interred in the wreckage of their former ship.

John Anderson, who died in November 2015, and Clarendon Hetrick, who died in April, will be recognized for their service in a ceremony aboard the USS Arizona Memorial. Divers will take their cremated remains beneath the water’s surface and place them inside the barbette, the protective circular armor support, of gun turret four.

The honor is accorded sailors and Marines who were assigned to the Arizona on Dec. 7, 1941. Since 1982, when the practice began, 39 crewmembers have been interred in the ship.

A third crewman, Raymond Haerry, died in September and will be interred in the ship next year.

For Anderson’s family, the moment will be especially meaningful: His twin brother, Delbert “Jake” Anderson, died aboard the Arizona.

Four of the five remaining Arizona survivors will be on the memorial for the interments: Lauren Bruner, Lou Conter, Ken Potts and Donald Stratton traveled to Hawaii and have been participating in events leading up to Pearl Harbor Day.

On their first day on Oahu, the four Arizona survivors attended a wreath-laying ceremony at the National Memorial Cemetery of the Pacific — known as the “punchbowl” for its location in a natural crater formation on the island — where a number of unknown Arizona crewmen are buried.

Most of the ceremonies and memorials will take place at the World War II Valor in the Pacific National Monument, which preserves the sunken ships and parts of the historic military bases.

“Nothing is more important to us here at the monument than commemorating the lives of those who served and sacrificed on December 7, 1941,” said Jacqueline Ashwell, the monument superintendent.

A sailor stands at attention by the USS Arizona memorial at an anniversary ceremony commemorating the 1941 attack on Pearl Harbor in Honolulu in 2013. The Navy and the National Park Service will conduct a ceremony Wednesday on the shores of Pearl Harbor, within view of the USS Arizona Memorial, where the remains of two sailors who survived the attack and the war will be interred later in the day. (Photo: Marco Garcia/AP)